Project Loon takes to the skies: Google launches BALLOONS in bid to bring wi-fi internet to the remotest places on Earth

Google has launched 30 balloons into the stratosphere from New Zealand as it experiments with ways to bring affordable internet access to the world.
Nicknamed Project Loon, the internet giant is sending the superpressure balloons 12 miles up into the air, where they will sail around the globe at twice the altitude of aeroplanes.
The helium-filled balloons inflate to 49ft in diameter and carry transmitters that could beam 3G-speed internet to some of the 4.8billion people in the world that are not yet online, supplying an area of about 780 square miles - twice the size of New York City.
Scroll down for video 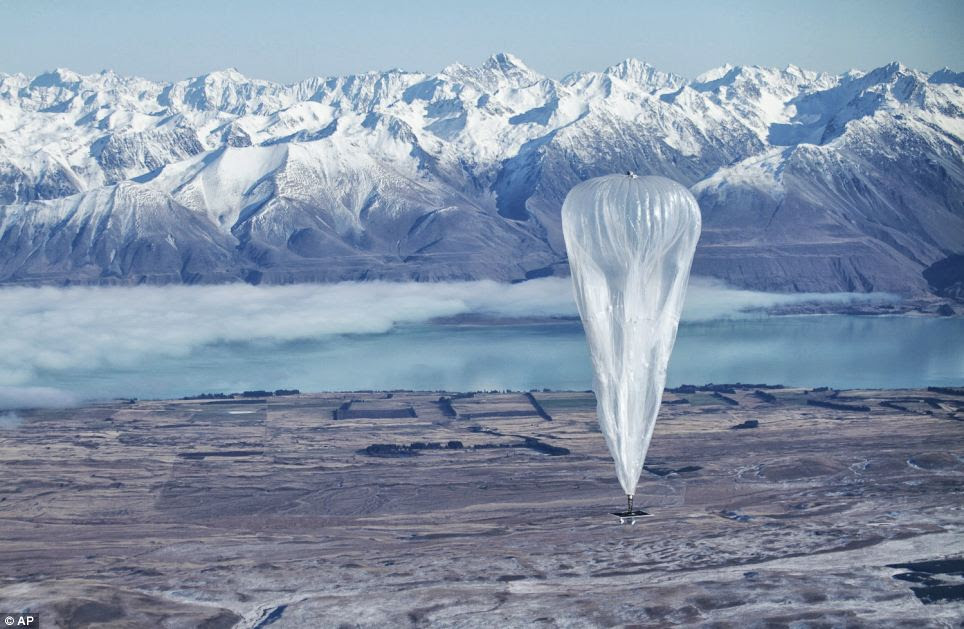 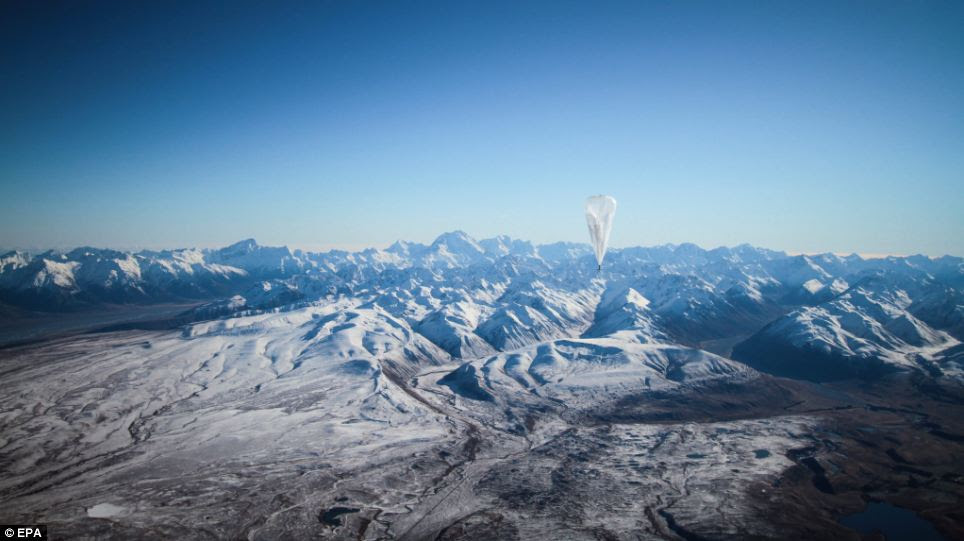 Project Loon, which is sending the internet balloons into the stratosphere, has been developed in Google's X Lab by the team who invented Google Glasses and its driverless car 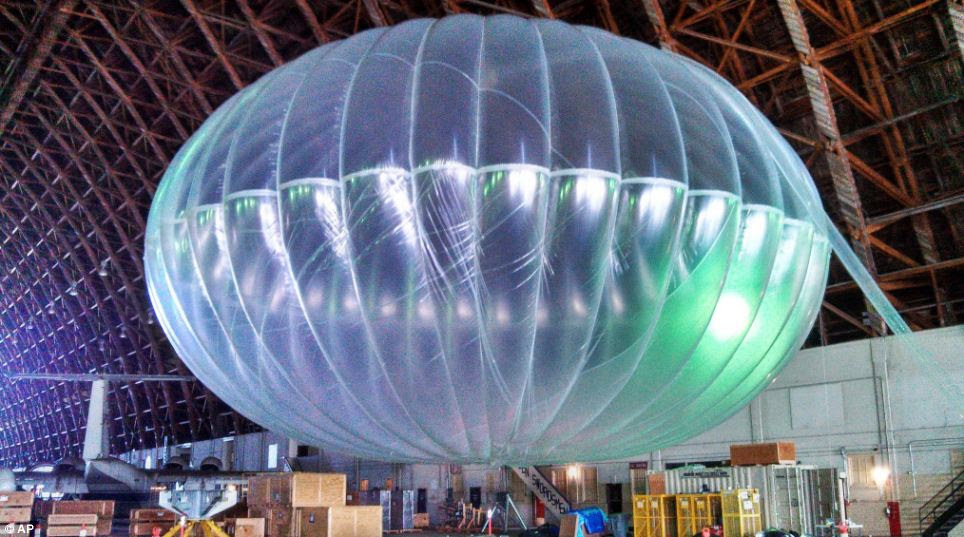 The project was tested in secret around California's central valley. In a hangar at Moffett Field airfield, a thin polyethylene balloon was inflated to its full diameter of 49ft 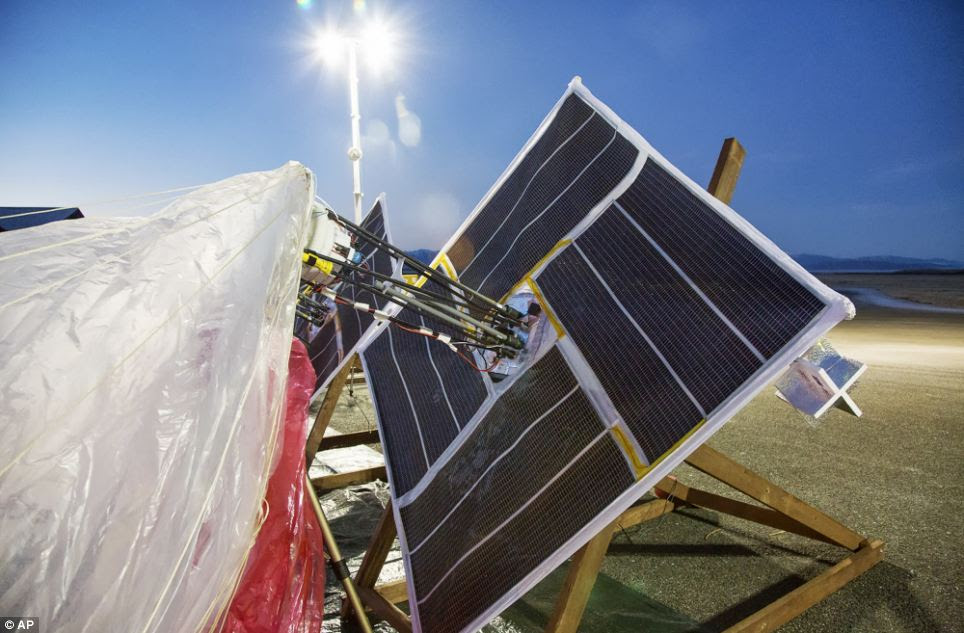 A photo taken before the launch shows solar panels and electronics being prepared for lift-off at the New Zealand site
Project Loon was developed in the company's X Lab by the same team behind Google Glasses and the driverless car. It is hoped it could save developing countries the high cost of laying fibre cables to get online and lead to a dramatic increase in internet access for the likes of Africa and south-east Asia.
Loon could even provide emergency back-up for areas during natural disasters.
This week the balloons, made from a thin polyethylene film, were released from a frozen field near Lake Tekapo on New Zealand's South Island, where they sailed past the magnificent Southern Alps mountains on their ascent.
'It's pretty hard to get the internet to lots of parts of the world,' Richard DeVaul, chief technical architect at Google[x], told the BBC.

'Just because in principle you could take a satellite phone to sub-Saharan Africa and get a connection there, it doesn't mean the people have a cost-effective way of getting online.
'The idea behind Loon was that it might be easier to tie the world together by using what it has in common - the skies - than the process of laying fibre and trying to put up cellphone infrastructure.'
Fifty volunteer residents signed up to be a tester for a project that was so secret no-one would tell them what it was for.
Technicians came to the volunteers' homes and attached bright red receivers the size of basketballs that look like giant Google map pins - which every building would need to receive the signal. 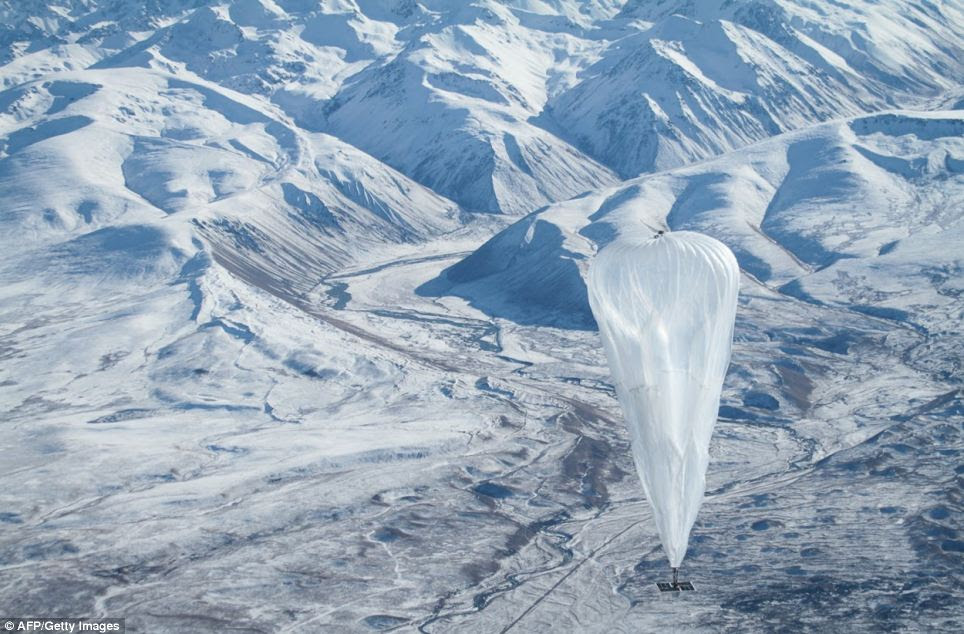 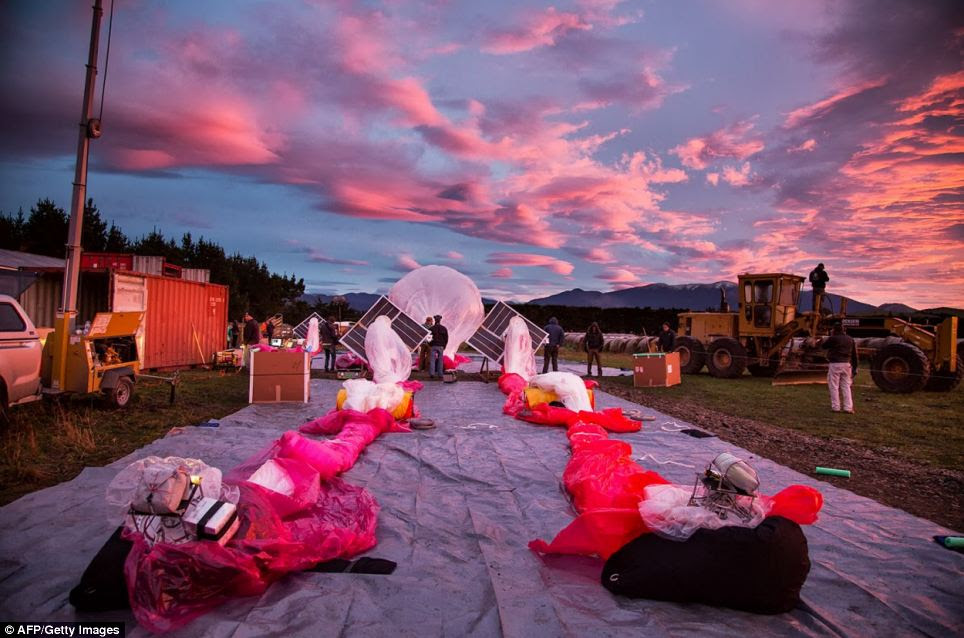 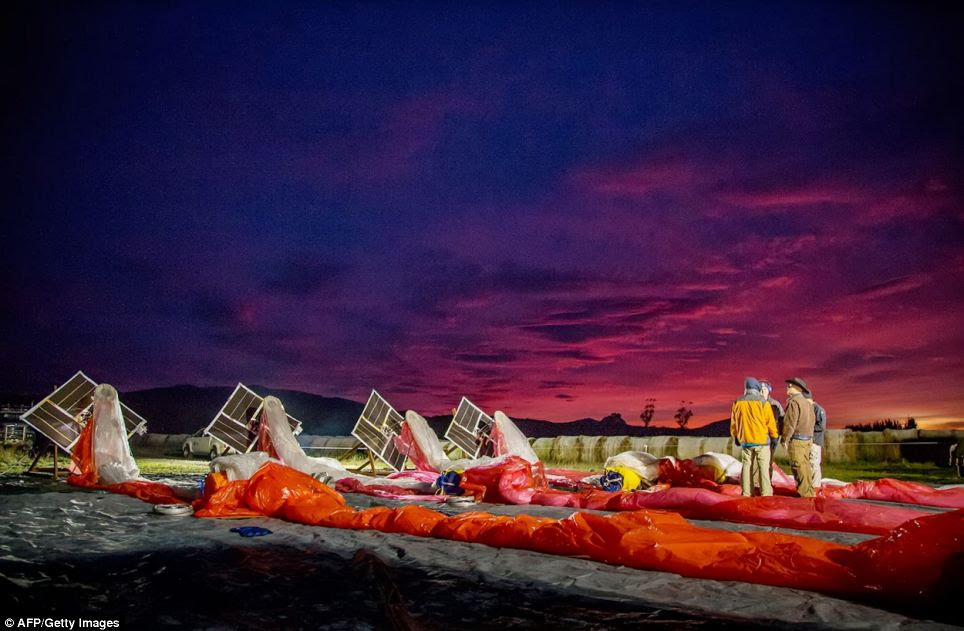 The balloons were laid out on the ground while engineers performed final checks on the transmitters they were to carry into the air
Charles Nimmo, a farmer and entrepreneur in the small town of Leeston, was the first tester to get online from the airborne balloons.
Mr Nimmo was able to spend about 15 minutes surfing the web before the balloon transmitting the signal sailed past.
His first stop was to check out the weather. He wanted to find out if it was an optimal time for 'crutching' his sheep, the term for trimming away the wool around a sheep's bottom.
Mr Nimmo is among the many people living in rural areas, even in developed countries, who cannot get broadband access.
After ditching his dial-up service four years ago in favour of satellite internet, he found himself stuck with hefty bills.
'It's been weird,' he said of the Google Balloon Internet experience. 'But it's been exciting to be part of something new.'
Project leader Mike Cassidy said: 'It's a huge moonshot. A really big goal to go after. The power of the internet is probably one of the most transformative technologies of our time.'
People have used balloons for communication, transportation and entertainment for centuries. In recent years, the military and aeronautical researchers have used tethered balloons to beam internet signals back to bases on Earth.
Google's balloons fly free and out of sight, scavenging power from card table-sized solar panels that dangle below and gather enough charge in four hours to power them for a day as the balloons sail around the globe on the prevailing winds. 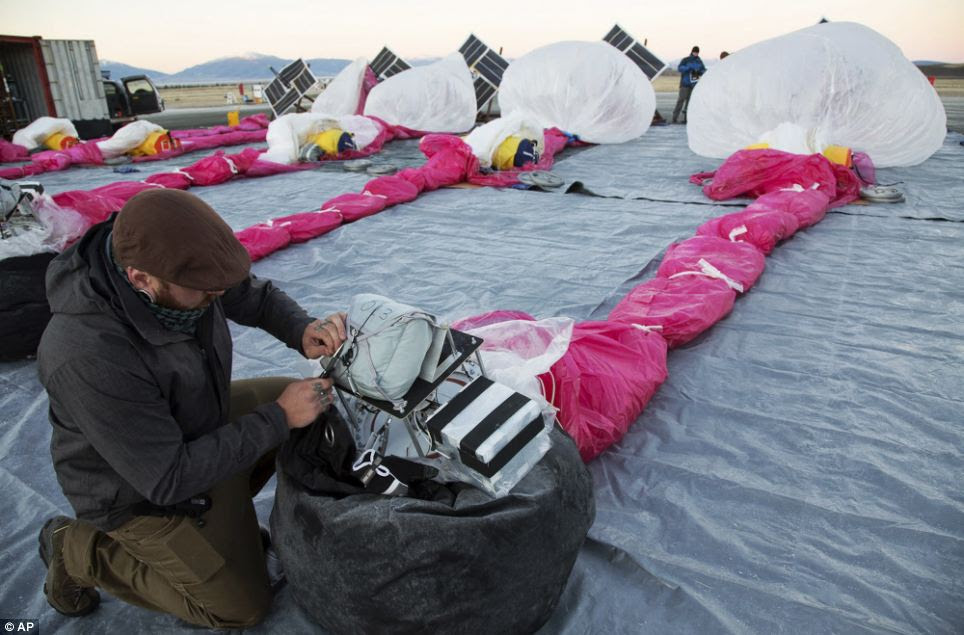 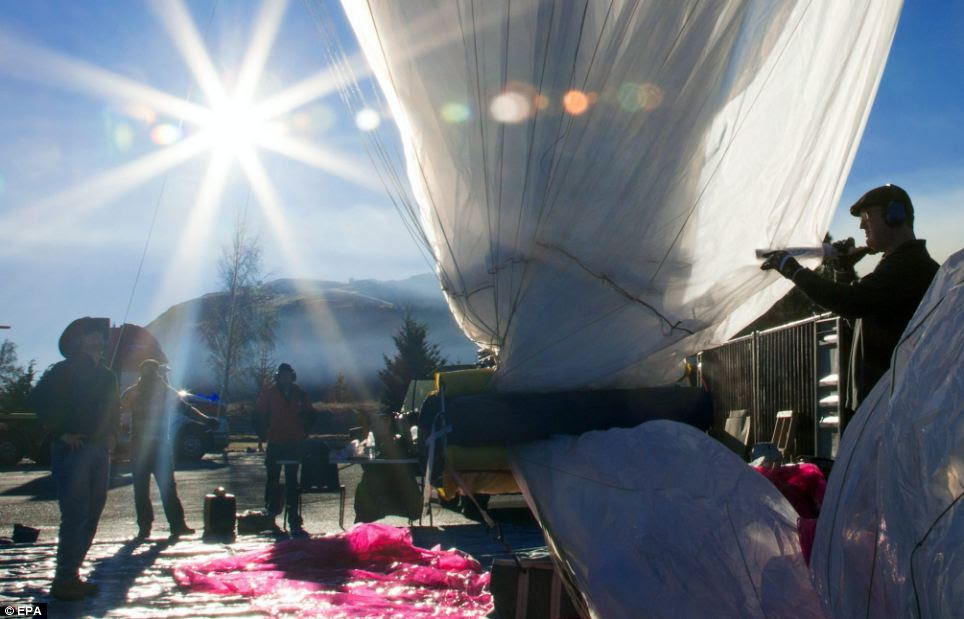 The project remains experimental, with Google hoping the balloons could beam a 3G-strength internet signal to developing countries and rural areas 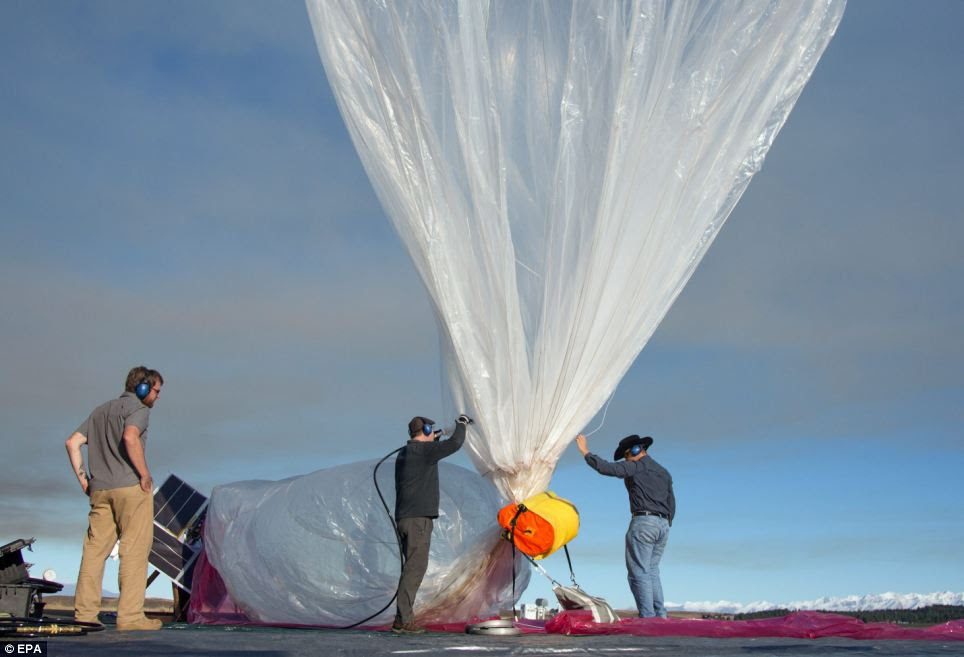 Two-thirds of the Earth's population remains without affordable internet access, with 4.8billion unable to get online
Far below, ground stations with internet capabilities about 60 miles (100km) apart bounce signals up to the balloons.
The signals would hop forward, from one balloon to the next, along a backbone of up to five balloons.
Before heading to New Zealand, Google spent a few months secretly launching between two and five flights a week in California's central valley.
'We were chasing balloons around from trucks on the ground,' said Mr DeVaul.
'People were calling in reports about UFOs.'
While there had been rumours about Project Loon, Google had refused to confirm the project until now.
But there have been hints. In April, Google's executive chairman tweeted: 'For every person online, there are two who are not. By the end of the decade, everyone on Earth will be connected.'
In Christchurch this week, the balloons were invisible in the sky except for an occasional glint, but people could see them in the remote countryside where they were launched or through binoculars, if they knew where to look.
At Google's mission control in Christchurch this week, a team of engineers used wind data from the National Oceanic and Atmospheric Administration to manoeuvre the balloons over snowy peaks, identifying the wind layer with the desired speed and direction and then adjusting balloons' altitudes so they floated in that layer. 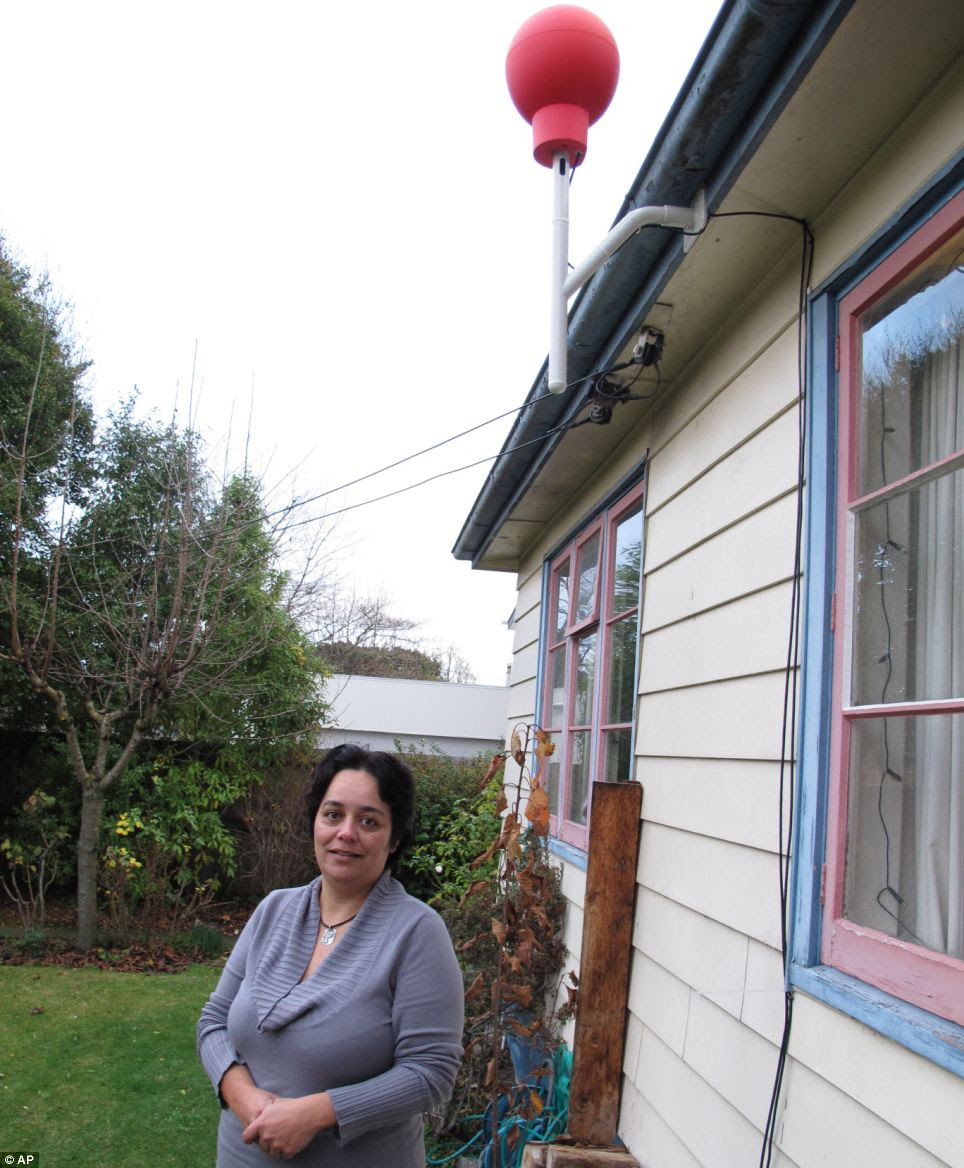 Christchurch resident Tania Gilchrist was one of the 50 testers who signed up for Project Loon without knowing what it was. A red Google Internet receiver was installed on her roof so she could receive the signal 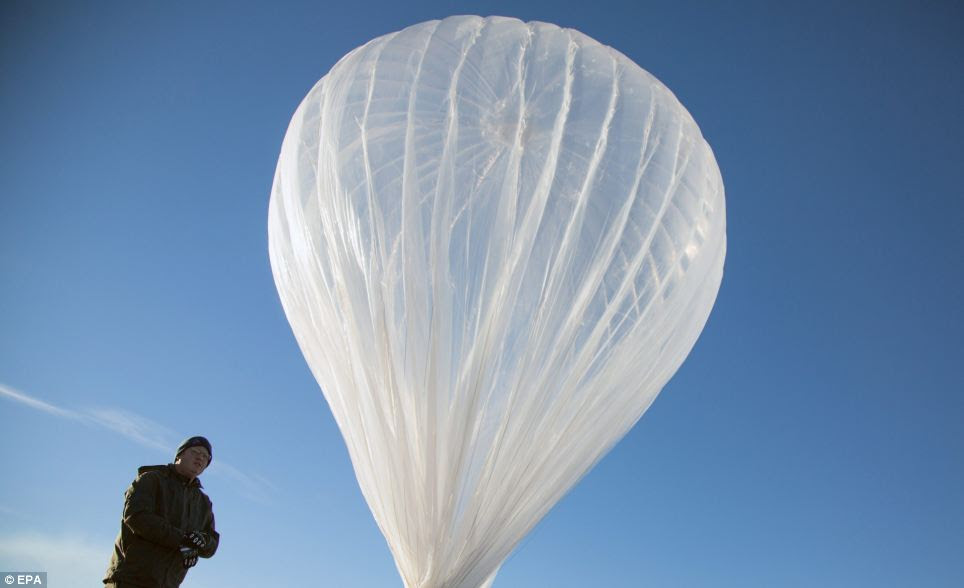 Google engineers studied balloon science from Nasa, the Defence Department and the Jet Propulsion Lab to design their own airships made of plastic films similar to grocery bags 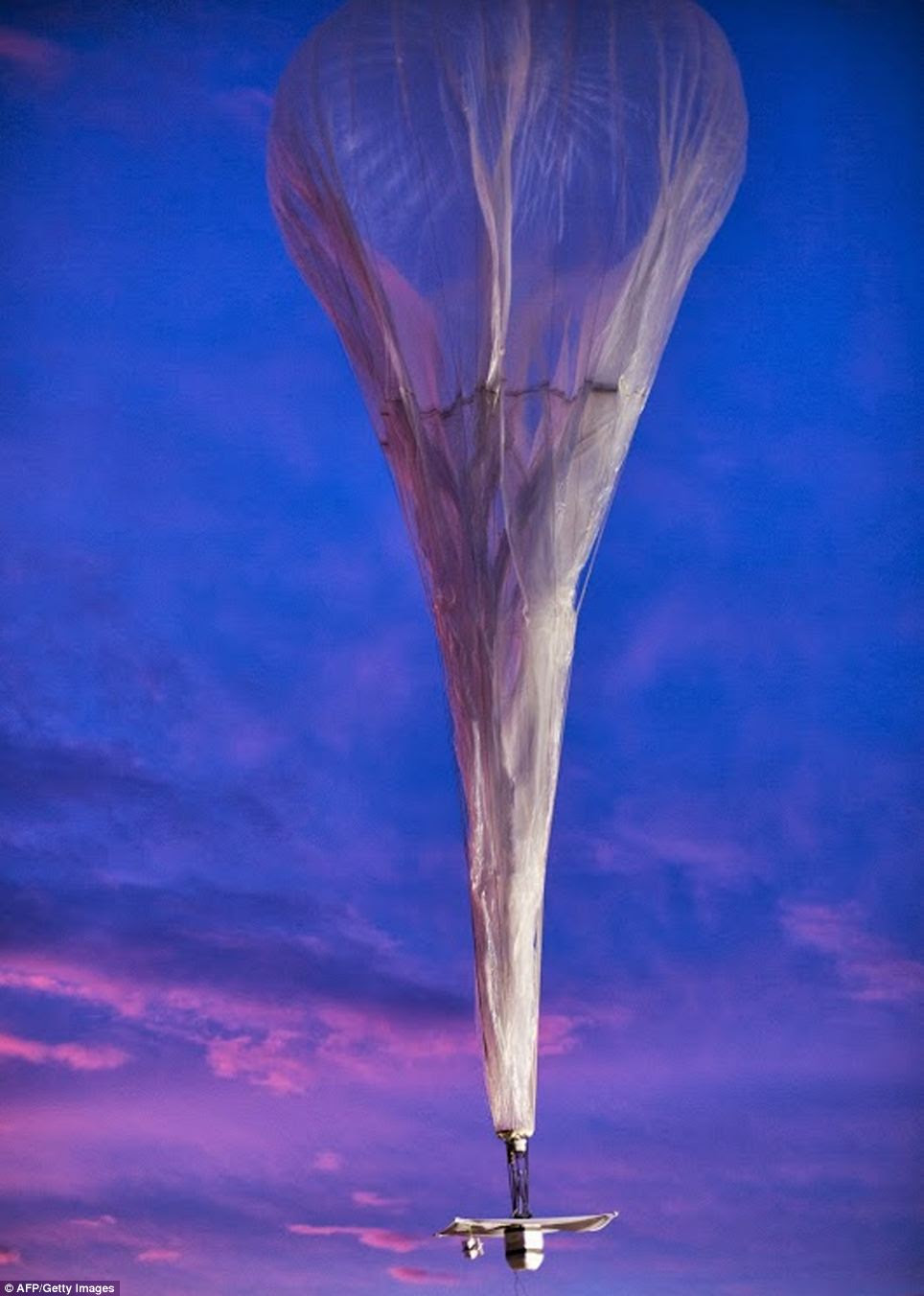 Google has released pictures from the first balloon flights, with this one seen as it began to inflate to its full diameter 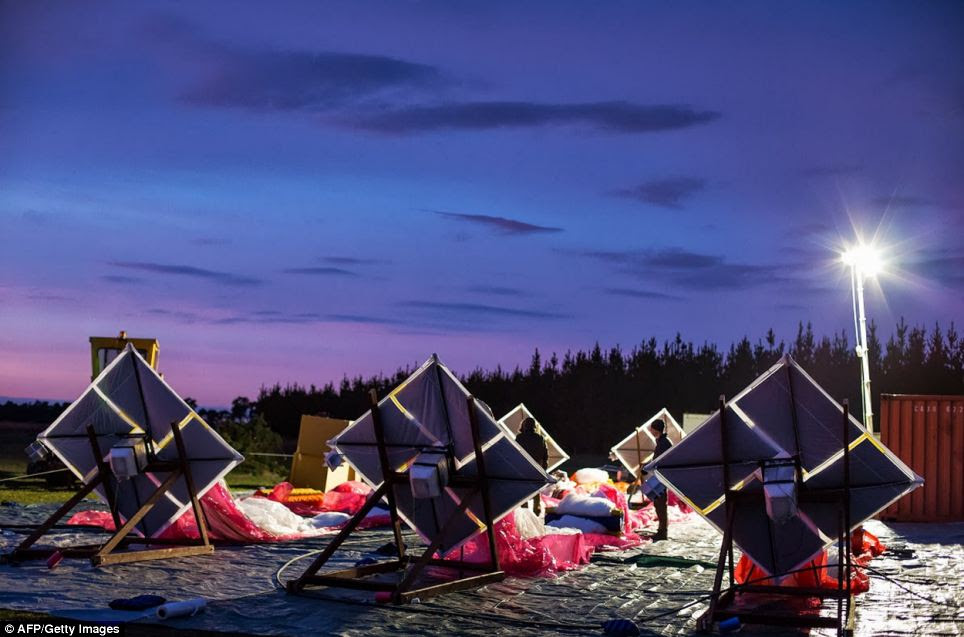 The solar panels and superpressure balloons were taken to Lake Tekapo in New Zealand, picked because of its remoteness
Christchurch was a symbolic launch site because some residents were cut off from online information for weeks following the 2011 earthquake that killed 185 people.
Tania Gilchrist, another tester, said she had been lucky to only lose power for ten hours following the quake.
'After the initial upheaval, the internet really came into play,' she said.
'It was how people co-ordinated relief efforts and let people know how to get in touch with agencies. It was really, really effective and it wasn't necessarily driven by the authorities.'
Terrain should not be a problem for Project Loon. The balloons could stream internet into Afghanistan's steep and winding Khyber Pass or Yaounde, the capital of Cameroon, a country where the World Bank estimates only four out of every 100 people are online.
There are plenty of catches, including a requirement that anyone using Google Balloon Internet would need a receiver plugged into their computer in order to receive the signal.
Google is not talking costs at this point, although it says it is striving to make both the balloons and receivers as inexpensive as possible.
Google's Project Loon will connect remote areas to the web 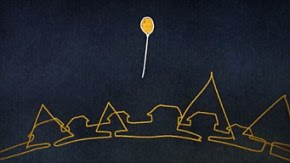 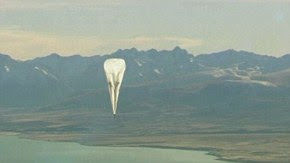 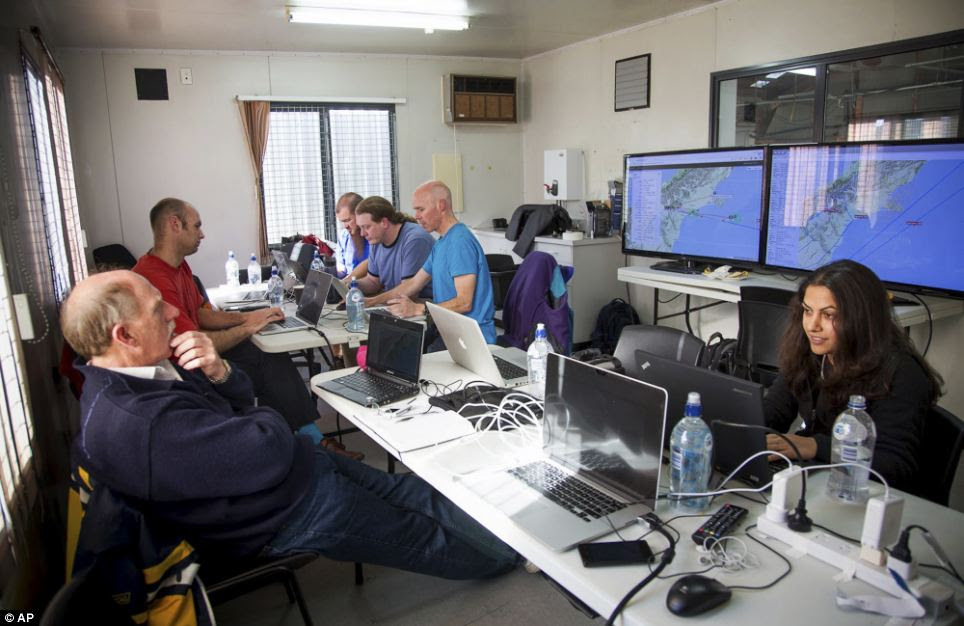 At mission control, Google engineers used wind data from the National Oceanic and Atmospheric Administration to manoeuvre the balloons over snowy peaks and get the balloons to float in the right wind layer 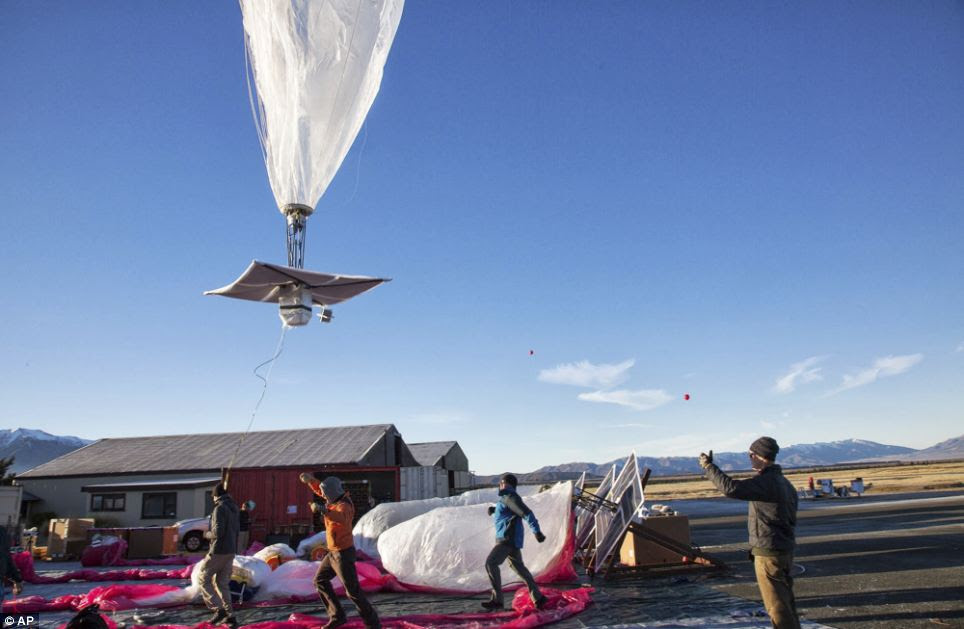 Thirty balloons carrying transmitters were released at Lake Tekapo on New Zealand's South Island this week
The signals travel in the unlicensed spectrum, which means Google does not have to go through the regulatory processes required for internet providers using wireless communications networks or satellites.
International aid groups have been pushing for more connectivity for more than a decade.
In pilot projects, African farmers solved disease outbreaks after searching the web, while in Bangladesh 'online schools' take teachers from Dhaka to children in remote classrooms through large screens and video conferencing.
Temple University communications professor Patrick Murphy warned of mixed consequences, pointing to China and Brazil where internet service increased democratic principles, prompting social movements and uprisings, but also a surge in consumerism that has resulted in environmental and health problems.
'The nutritional and medical information, farming techniques, democratic principles those are the wonderful parts of it,' he said.
'But you also have everyone wanting to drive a car, eat a steak, drink a Coke.'
As the world's largest advertising network, Google itself stands to expand its own empire by bringing internet to the masses.
More users means more potential Google searchers, which in turn give the company more chances to display their lucrative ads.
Richard Bennett, a fellow with the non-profit Information Technology and Innovation Foundation, was sceptical, noting that mobile phones are being used far more in developing countries.
'I'm really glad that Google is doing this kind of speculative research," he said.
'But it remains to be seen how practical any of these things are.'
Imogen Wall, of the United Nations Office for the Co-ordination of Humanitarian Affairs, said: 'The potential of a system that can restore connectivity within hours of a crisis hitting is tremendously exciting.
'If the service fails in a crisis, then lives are lost.'

The technology at the heart of Project Loon 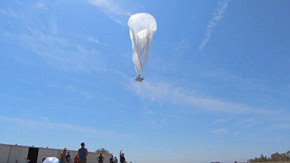 "Hi!..
Greetings everyone, my name Angel of Jakarta. during my
visiting this website, I found a lot of useful articles, which indeed I was looking earlier. Thanks admin, and everything."
Ejurnalism

You might be eligible for a new solar energy program.
Click here and discover if you qualify now!