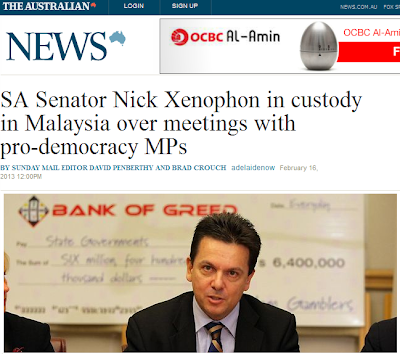 EXCLUSIVE: Independent Senator Nick Xenophon is being detained under police guard and awaiting deportation from Malaysia as an "enemy of the state", over a series of planned meetings with pro-democracy MPs in Kuala Lumpur.Senator Xenophon landed in KL this morning but has been under armed guard for the past two hours. He is being held in an interrogation room at the Kuala Lumpur International Airport, which has a series of adjoining cells holding female prisoners.He has been told he is not allowed to make telephone calls and is not even allowed to go to the bathroom without a police guard.Senator Xenophon managed to make a call to The Sunday Mail when he was left unattended in the interrogation room."I am effectively a prisoner here," Senator Xenophon said. "I'm being held in an area with all these holding cells which are full of women. They have basically told me I am an enemy of the state. They are trying to get me on the next plane out of here and back home."Senator Xenophon managed to use his contacts to get a text message to the Australian High Commission in KL and is awaiting a visit from High Commissioner Miles Cooper.After he landed this morning the South Australian anti-pokies Senator joined the customs queue but was told there were "irregularities" with his passport.He was then taken away by the immigration officials to the guarded area where he was told that the Malaysian authorities knew of his stance on human rights in Malaysia and his itinerary for this week.Senator Xenophon was scheduled to meet with pro-democracy and Opposition MPs - yet oddly he had also been granted a meeting with a senior Government MP, the Special Minister of State."I was even meeting members of the Government, I mean, the whole situation is ridiculous, we are meant to be the closest of friends with Malaysia," he said."We are meant to be having a people swap deal on asylum seekers but so far it looks like the only person being swapped is me."Senator Xenophon believes that a recent article he wrote for Fairfax newspapers in January, which was critical of human rights in Malaysia, may have emboldened the authorities to deny him entry.Last year he was also unwittingly caught up in a 25,000-strong democracy protest in KL where he was tear-gassed. Associate Professor Clinton Fernandes of the International and Political Studies Program at the University of NSW said the Malaysian Government was worried about Senator Xenophon because he "provides the public with an international voice about problems with the electoral system."Senator Xenophon and Dr Fernandes were part of a 2012 International Fact-Finding Mission on Elections in Malaysia, whose report was critical of the Government and which called for electoral reform."Senator Xenophon and a delegation of Australian parliamentarians were going to Malaysia to meet with politicians, the Malaysian Bar Council and the Electoral Commission to discuss electoral reform outlined in that report," he said."There is no doubt the reason he is being deported is because the report was critical of the electoral system - for example it showed a leading government figure has an electorate with just 7000 voters while the Deputy Opposition Leader has an electorate with 100,000 constituents."There is a class of people who have never lost power since Malaysia was formed and they are now worried as the youthful population is calling for democratic changes and they don't know what to do about it."There has been no violence so the government can't call them terrorists and crack down on them, there have been no agent provocateurs to provide a trigger for an armed crackdown. Senator Xenophon's presence provides them with an international voice about problems with the electoral system, so they want him out."Dr Fernandes said Senator Xenophon was not at risk of harm from Malaysian authorities but said they wanted him out of the country to avoid a focus for discontent, as elections must be held by June.He noted Senator Xenophon has annoyed the Government by giving copies of the Fact Finding Mission on Election in Malaysia to every diplomatic mission base in Canberra to ensure the wider international community was aware of electoral issues in the nation.The fact finding mission was conducted by international observer group with representatives from India, Pakistan, Germany, Indonesia, the Philippines as well as Senator Xenophon and Dr Fernandes.Senator Xenophon visited the nation in April last year when he was teargassed by riot police breaking up a mass peaceful demonstration in Kuala Lumpur demanding democratic reforms.Source: The Australian

Malaysiakini
Posted by azam at 9:52 PM