The drama surrounding the Lahad Datu standoff involving the so-called Sultan Sulu’s army over the past few days has taught me a number of things. These are what I have learnt :

Restrain shown by our security forces : Pass
We are a civilised nation and our forces acted in a very professional manner. The restrain shown during the first two weeks is commendable. They did the right thing. Instead of rushing to shoot “intruders”, they gave the intruders ample time to leave or give up. If you understand the history and socio-political situation in the Sulu and Celebes sea region, you will know that the situation is a lot more complicated with long-term implications. Shooting people isn’t exactly the best solution. Although many Malaysians ridiculed our forces for being “too soft”, they did the right thing by engaging in diplomacy first. Only when diplomacy failed, did they bring out the battering ram.

Knowledge of history and geography : Fail
Most Malaysians are bad at history. It is rather shocking that a vast majority of Malaysians that I have spoken to had no clue about the Sulu Sultanate and its relationship with Sabah. Even many Sabahans are totally lost. I don’t expect people to know the name of the Sultan Sulu’s mother-in-law’s cousin or the number of concubines he had. But at the least, I expected people to know that the Sulu Sultanate once ruled over a vast area including North Borneo. Itupun tak tahu. These things are taught in school, no? Many people are hearing about the Sultan Sulu for the first time. Yo people, where have you all been?

If they are bad in history, they are worse in geography. Many people, particularly in Peninsula Malaysia, cannot comprehend that the islands of the Philippines are within swimming distance to Sabah. Many Malaysians are clueless that significant Filipino populations are within 1 hour boat ride away from Sabah. Some thought that Lahad Datu was an island. I think a vast majority of people from Peninsular Malaysia and Sarawak will not be able to point out Kunak, Semporna or Lahad Datu on a blank map of Sabah. Several persons have asked me “Semporna tu di Malaysia ka di Indonesia?”.

Patriotism : Pass
A vast majority of Malaysia displayed great patriotism in supporting our security forces. The maxim that there is nothing like a common enemy to bring people together. Following the social media and kedai kopi talks, I was very impressed and pleased that the patriotism and love shown by Malaysians for their country. The words for encouragement to our police and army were inspiring. People have hoisted the national flag at their homes. People have changed their profile pictures on social media. People have donated generously. [of course, there will always be unpatriotic nitwits – but I believe they are only a tiny minority] 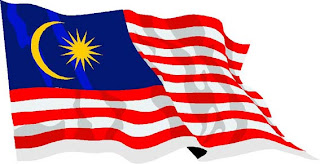 Communications : Fail
The communication and public relations skills of many government agencies are either horrendously horrible or horribly horrendous. My pet cockcroach can communicate better than them. The Government should have known that public will be anxious when it involves their safety.

Information on the stand-off has not been forthcoming regularly. People do not expect the army or police to reveal their tactics, weaponry or location of personnel. What people need is regular scheduled statements or updates by the Government on the safety situation in Sabah.

By providing timely and appropriate information about the situation, you could avoid much of the misinformation and rumors that is going around. When the Government provided information, it is usually  a case of too little, too late. Failure to provide timely, appropriate and sufficient information caused a lot of heartache.

Even now, information is very sketchy. It is very common for governments and armed forces to give daily media briefing in times of conflict. In the case of Sabah, this has not been happening regularly. Rumors are abound. People are forced to read stuff of foreign media – which of course do not have the whole story either.

In the case of the Lahad Datu stand-off, people are believing all sorts of shit. Sikitpun tak fikir. Telan bulat bulat. The failure of the government to provide timely information is partly to blame but I have come to the conclusion that there are many, many terribly gullible people in this country. No wonder the Nigerian money scam is so successful here.

Yo people, tolong pakai otak sikit. Just because it is on Facebook or on the internet, does not mean it is true.

Rumor mongers : Fail
Malaysia has plenty of rumor mongers. They listen to a small piece of crap from an unknown source, then add kicap and chili sauce to it and post it on Facebook and Twitter. They are the BIAWAKs (bloody idiots armed with a keyboard). I think you must have noticed them being extremely active over the past week. They post things like this on Facebook  “heard that 500 armed men landed in KK last nite” or “heard rumors that 10 soliders have been tortured”. For what? Yo morons, you think your friends on Facebook know the answers?. Unsubstantiated statements like that add no value to anyone – they only cause confusion and fear among the people. Bodoh. If you find your friends posting statements like these on FB or Twitter, smack them on their face.
Example of words form BIAWAK (bloody idiots armed with a keyboard) 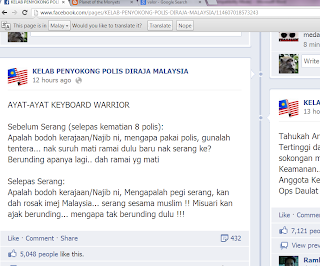 Partisan politics : Fail
Some politicians will sell their mothers just to get a few votes. They are quick to blame every mistake, wrongdoing or death on the other party. They mock our soldiers and our police.
I don’t think these fellows are interested in the welfare of the people or the security of the nation. Everything is about winning points.  And this involves not only politicians but also their hardcore-brainless supporters. Politicians posting statements mocking our security forces (read more here) and the seriousness of the situation are real morons who deserve to be sent to Mindanao to help clean Sultan Sulu's backside.

Inspiring confidence : Fail and Pass
I think both the Ministers (Hishamuddin and Zahid Hamidi) have failed to inspire confidence in the Malaysian public. Their statements were fuzzy, spoken with little confidence and only helped to muddle the situation.

The chaps from our police and army did a much better job in convincing the public that they have things under control. I rather listen to our generals than to listen to Hishamuddin or Zahid.

To Najib’s credit, although not particularly inspiring, he has remained cool and said the right things and the right time. Most importantly, he gave mandate to our armed forces to do whatever it takes to resolve the crisis.

And Anwar Ibrahim, as the opposition leader and someone to aspires to be the PM, he has said and done almost nothing during this crisis to inspire confidence. Complete FAIL.

Police and army valor : Pass
Our men in uniform showed courage and professional. Despite losing 8 men, our troops never once gave up. They risked their lives so that many others may live peacefully. I know many have condemned our police and army as being inapt and ill-equipped and some morons even questioned the need to use AirAsia to fly our troops. Despite these mockery, our troops performed admirably. And those of you who always questioned why we are spending so much money on fighter jets and artillery, I think you got your answer yesterday. To all our men and women who are out there defending our soil, bravo, bravo, bravo. 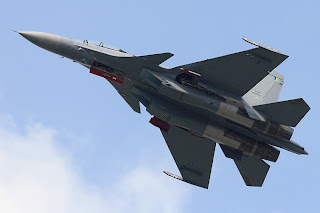 http://planetofthemonyets.blogspot.com/2013/03/sultan-sulu-stand-off-siapa-pass-siapa.html
Posted by azam at 2:25 PM