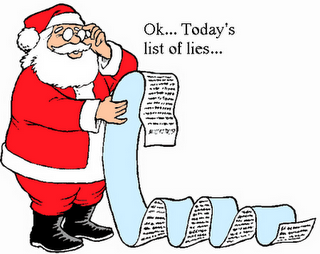 It is better to sit alone than in company with the bad; and it is better still to sit with the good than alone. It is better to speak to a seeker of knowledge than to remain silent; but silence is better than idle words." - Prophet Muhammad (PBUH) - Book Sahih Bukhari

1st April - a day when people lie, play jokes and mock in the name of entertainment. This ugly practice of lying, which is considered to be merely a humor, is known to have caused great harm to many. Even trauma and deaths. Still this dishonest tradition is not only practiced among the common masses, but also newspapers and magazines participate in it by publishing false news and untrue stories on the first day of April!
Regarding the subject of “April Fool” (in Arabic, Kithbat Neesaan or "The Lies of April"), the origin of this lying is not known for sure. There are differing opinions concerning that: Some of them said that it developed from the celebrations of spring at the equinox on March 21.
Some of them said that this innovation appeared in France in 1564 CE, after the introduction of a new calendar, when a person who had refused to accept the new calendar became the victim of some people who had subjected him to embarrassment and made fun of him, so he became a laughing-stock for others.
Some of them said that this innovation goes back to ancient times and the pagan celebrations connected to a specific date at the beginning of spring, so this is the remnant of pagan rituals. It was said that hunting in some countries was unsuccessful during the first days of the hunt in some countries. This was the origin of these lies which are made up on the first day of April.
The Europeans call “April Fool” le poisson d’avril (lit. “April fish”). The reason for this is that the sun moves from the zodiacal house of Pisces to the next house, or because the word poisson, which means fish, is a distortion of the word passion, which means suffering, “so it is a symbol of the suffering endured by Jesus (peace be upon him), according to the claims of the Christians, and they claim that this happened in the first week of April.
Some of the kufaar call this day All Fools’ Day, as it is known to the English. That is because of the lies that they tell so that those who hear them might believe them and thus become a victim for those who are making fun of him.
The first mention of April Fool in the English language was in a magazine known as Dreck Magazine. On the second day of April in 1698 CE, this magazine mentioned that a number of people were invited to come and watch the washing of black people in the Tower of London on the morning of the first day of April.
One of the most famous incidents that happened in Europe on April 1st was when the English newspaper, the Evening Star, announced in March 1746 CE that the following day – April 1st – that there would be an parade of donkeys in Islington, in England. The people rushed to see these animals and there was a huge crowd. They continued waiting and when they got tired of waiting, they asked about when the parade would be. They did not find anything, then they knew that they had come to make an exhibition of themselves, as if they were the donkeys!
Prophet Muhammad (pbuh) said to us:
"Be not like the hypocrite who, when he talks, tells lies; when he gives a promise, he breaks it; and when he is trusted, he proves dishonest." (Book - Sahih Bukhari)
After knowing this reality, let us make a promise to ourselves never to spread stories about Muslims or Islam or history, unless we have clear evidences. Nobody on earth has more proof than we do and we should take responsibility for it. Of course we should not celebrate this day of fools and lies. But for sure we are celebrating it if we keep on contributing to these lies of Muslim Spain.
We are sure that lying did not exist during the first and best generations of Islam. It did not come from the Muslims, but rather from their enemies. But today we ourselves are becoming the enemies of truth and the enemies of Islam.
We have seen how Islam forbids lying even in jest, and it forbids frightening a Muslim whether in seriousness or in jest, in words or in actions.
This is the law of Allaah in which is wisdom and care for people’s circumstances.
And Allaah is the Haqq [Truth] and the Source of Strength.
Source: http://khilafatworld.blogspot.com/2011/03/april-fool-islamic-perspective.html
p/s Bila berlaku penjajahan, yang menjajah akan ambil kebaikan dari dunia Islam. Yang dijajah suka sangat meniru keburukan dari penjajah yang nampak seperti "moden".