Comic-Con fans have come to expect big things from the Marvel Studios team behind the "Iron Man" franchise and this year's offerings did not disappoint.
At first, it appeared Marvel producer Kevin Feige and "Iron Man 3" director Shane Black would serve as hosts discussing the new film. But then Robert Downey Jr., Tony Stark himself, made an over-the-top entrance from the back of Hall H to the musical stylings of Luther Vandross.
"I have three questions for you," Downey told the crowd. "How much do I love you? How much do you love me? And do you want to see some footage?" 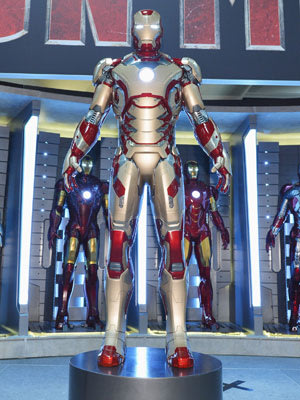 The new Iron Man suit (Photo: Walt Disney Pictures)The teaser footage then began with Tony Stark unveiling yet another Iron Man suit. This new version of the armor literally flies across the room to arrange itself on Stark's body. However, there are a few humorous hiccups as some of the fast-flying equipment nearly takes him out while attempting to suit up.
The new Iron Man armor reverses the color scheme of previous versions, using only a small amount of red coloring to outline the suit itself. The traditional gold colored plating has also been replaced with a lighter, almost creme hued shade. Most importantly, the armor's new functionality will allow Tony Stark to suit-up in seconds, as individual pieces of the armor attach themselves and assemble around Stark's body. Stark appears to direct the new armor pieces by will power alone, backing up rumors that nanotechnology will play a significant role in the film, as Stark takes one step closer to becoming one with his iconic Iron Man armor.
But the mood takes a decidedly darker turn as the teaser clicks into full gear. Several military helicopters appear outside Tony Stark's home and fire missiles into its walls, sending Stark and Gwyneth Paltrow's character Pepper Potts flying backwards.
As this scene unfolds, the voice of Ben Kingsley's Mandarin character narrates, "Some people call me a terrorist. I consider myself a teacher," he says. "Lesson number one? Heroes; there is no such thing. As you cry out for mercy, you will be silenced."
"This guy is the Mandarin," Black said of Kingsley's performance.
For months, the cast and crew of Iron Man 3 had played down speculation that Kingsley would take on the role of the Mandarin, instead suggesting he might play a corporate villain.
The clip also showcases new stars Guy Pearce and Rebecca Hall, though both only appear for a quick glimpse and neither speak in the footage.
And Black promised that the third outing would be more grounded than the somewhat disappointing "Iron Man 2." "'Iron Man 3' is all about a return to the Tony Stark world," Black said.
Both Downey and former director Jon Favreau were quick in their attempts to downplay any speculation that there was bad blood between Favreau and Black. Not only is Favreau returning to act in the third film, but also he is serving as executive producer.
"This man is giving me every piece of advice and help," Black said of Favreau's involvement.
"At first it was weird walking on the set if an Iron Man movie but Shane and Robert made me feel really welcome," Favreau said. "I feel like a proud grandpa who doesn't have to change the diapers because he gets to play with the baby."
"Iron Man 3" flies into theaters in May 3, 2013.
Posted by azam at 4:40 PM