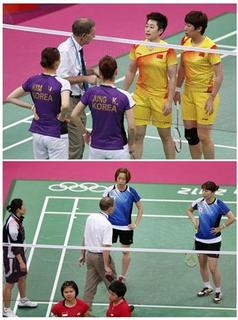 (Reuters) - China's head badminton coach Li Yongbo took a swipe at the sport's federation on Friday and said enough punishment had been dealt to the eight expelled players and their teams for their part in a match-throwing scandal at the London Olympics.
Li was ordered to make a public apology by China's national delegation this week and said he was to blame for the negative tactics of his world champion pair Yu Yang and Wang Xiaoli, who played to lose a preliminary round match in order to secure a more preferable position in the knockout rounds.
The International Olympic Committee weighed into the matter on Thursday and said it had asked the China, South Korea and Indonesian national delegations to investigate the disqualified players' entourages.
The 49-year-old Li appeared on Chinese state television this week to apologize for his role in the scandal, but has been slammed by local media and pundits who have called for him to step down.
"I think the punishment is already too excessive as it is. Really. It's already too much," Li told reporters on Friday.
"It only shows that our (badminton) federation is really not up to the mark.
"If I was the chairman it would not have played out like this," he added, drawing a laugh from Chinese reporters.
Li, who won a doubles bronze in badminton's debut at the 1992 Barcelona Games, may yet face additional sanctions when he returns to Beijing for a de-briefing with Chinese sports officials.
Posted by azam at 4:02 PM