LONDON – Noor Hussain Al-Malki created a slice of history on Friday even as she sat on the track at the Olympic Stadium on Friday with her head bowed, tears welling in the corner of her eyes and her teeth gritted from the pain of a pulled hamstring.
The 17-year-old became the first female athlete to compete in an Olympic Games from Qatar, which previously barred women due to religious and cultural protocols.
Al-Malki entered the 100 meters thanks to the wildcard system that offers places to competitors from traditionally weaker Games nations. With a personal best more than two seconds outside the world record, she was not expected to be any kind of a threat.
[ Related: Afghani sprinter vows to show women new future ]
Sadly, her Olympic adventure lasted just a couple of seconds. As a nervous Al-Malki pushed out of the starting blocks, she immediately clutched at her right leg, wincing in pain. After a couple of steps, she collapsed to the track and stayed there as her fellow competitors sprinted toward the finish line.
Track officials came to her aid and eventually helped her from the arena.
"I am sad," Al-Malki said to an Arabic television crew as she limped past them. 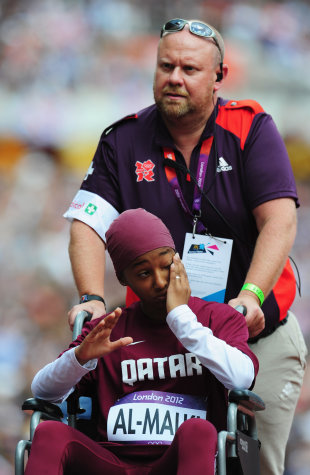 (Getty Images)Even though Al-Malki's Games ended in a manner that no athlete wants, her journey in even getting to London is a triumph in itself.
Yahoo! Sports spoke to Al-Malki by telephone a month ago, and she talked about her wish to serve as a role model to young girls and women in her homeland.
"I can't say that I ever dreamed of going to the Olympics when I was growing up," she said. "Because that was just not possible, it was not something you thought about.
[ Related: Saudi judoka loses first bout, promises she will be back ]
"My dream started when they actually told me I would be competing. It was the best thing I could imagine, to be going to the Olympics. I was not sure it was real, but it was.
"I understand the responsibility of this, how important it is to say you are representing your country. It will be my proudest moment and I hope it will show other girls what you can achieve with sport and what it adds to your life. I am not one of the world's best athletes, but I want to show that being athletic is a good thing that should be encouraged."
Qatar has made strides to improve its international reputation and hopes to follow up its incredible victory in securing the rights to host the 2022 World Cup with a successful Olympic bid for 2024.
To stand any kind of chance, Qatar was told by the International Olympic Committee that it would need to end its discriminatory policies towards female athletes. Qatar was one of only three nations to not send a woman participant to Beijing in 2008 on cultural grounds.
[ Video: Afghanistan's only female athlete looks to inspire ]
Women in the Middle East still face a battle for social equality, but programs such as those brought in by Qatar are a step in the right direction. The country has opened a development center where teenage girls are actively encouraged to conduct athletic training under the supervision of skilled coaches.
Al-Malki was able to take only a few steps down the London track on Friday, but for her, an even more important race has already been run.
"I am an Olympian," she said. "A female Olympian from Qatar. That is wonderful."
Posted by azam at 5:25 AM